One of the most novel and among the most collectable of all tobacco tins is a series of six little people known to collectors and “Roly Polys”. Each of these little characters is 7 inches tall, by 6 inches in diameter at the widest point. Each is multicolored and carefully lithographed. They were manufactured by combining 3 pieces of metal, two of which were seamed at the beltline to form the body, and a separate piece which formed the head which lifts and separates from the body to allow access to the tobacco stored inside.

The tins were obviously difficult to design and manufacture in the early 1900’s and much of the design work had to be executed in a distorted manner as they were lithographed onto sheets of flat tin which were then punched into round configurations, thus bringing the design into proper proportion. The care which was taken in this operation is evident when one notices the precise matches between the upper and lower pieces of tin where they join at the beltline.

Nobody knows for sure where the term “Roly Poly” originated with regard to these tins and rightfully should be called “Brownies” as they were intended to store brownies after use, but rarely if ever are. Furthermore, it is unknown what the original designer and manufacturer intended each of the 6 characters to be named. Today, collectors refer to the tins as “Satisfied Customer”, “Dutchman”, “Storekeeper”, “Inspector from Scotland Yard”, “Mammy” and “Singing Waiter”. These unofficial terms were first seen in Ernest Pettit’s second book on tin containers and Pettit himself has declined to state whether the names are official, or if the were coined by him. Either way, the names have caught on and are here to stay. 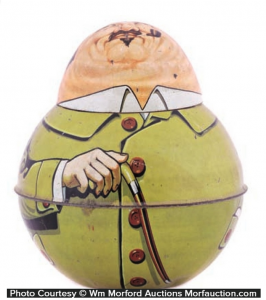 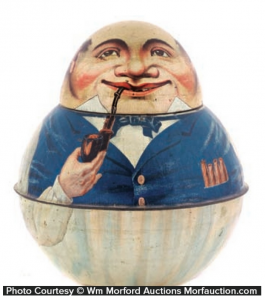 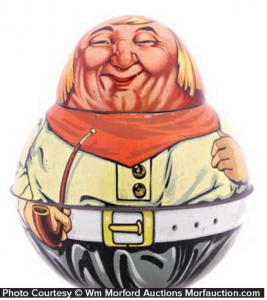 Each of the little Roly Poly characters has a distinct personality which is reflected in the lithography of their respective tin. The Dutchman is a happy, contented old gentleman who’s probably furnishing us with a big belly laugh. The storekeeper is much more restrained as a good businessman should be while puffing on his pipe and minding the shop with his bow tie and apron on. The Scotland Yard Inspector (by far the most rare of the six Roly Poly tins) is a stuffy, irrepressible, humorless chap, with a high starched collar and walking cane. The Satisfied Customer is a rather gaudily dressed gent, with a bright red blazer, striped vest, checkered trousers, diamond stickpin and sharks tooth on a golden chain. Mammy (the most common of the Roly Poly characters), seems content overall, puffing on her corncob pipe, with cotton dress and a plug of tobacco in her pocket. Poor old formally dressed Singing Waiter has been standing there with his mouth open for generations now and nary a noise comes out, which is no wonder when you try to hum along with the dreadful sheet music he is singing from.

These Roly Poly tins were originally novelty items. Each help a pound of tobacco, and in all likelihood a premium price was charged for the tobacco in order to obtain the fancy tin as well. These tins were used by four different tobacco brands including Mayo’s, Dixie Queen, U.S. Marine and Red Indian. All four of these brands fell under the monopolistic control of tobacco tycoon James Buchanan; of Duke’s American Tobacco Company who later acquired the original tin can plant where the Roly Polys were manufactured.

It is believed a full collection of Roly Polys would contain 18 tins as Red Indian and U.S. Marine only packaged their products in 3 versions of the tins only using the Singing Waiter, Mammy and Store-keeper varieties, while Dixie Queen and Mayo’s used each tin. The most elusive of these tins are the Dutchman, Satisfied Customer and Scotland Yard Inspector for Red Indian and U.S. Marine Tobacco brands and are thus the most valuable of the roly poly tobacco tins.

For many years it was unknown who manufactured the Roly Poly series of novelty tins. Strangely, the manufacturer never marked the tins which was extremely unusual for a tin of that era. To unravel the mystery, collectors turned to the files of the United States Patent Office and discovered they tins were manufactured by the Tin Decorating Company, more commonly known by its trademark name “Tindeco”, which was at one time said to be the largest tin lithography plant in the world. Tindeco was a wholly-owned subsidiary of Duke’s American Tobacco Co.

The patent for the design of the Roly Poly tins was applied for and issued to W. Tuttle of Baltimore in 1912. We have been able to obtain copies of the original patent paperwork shown below 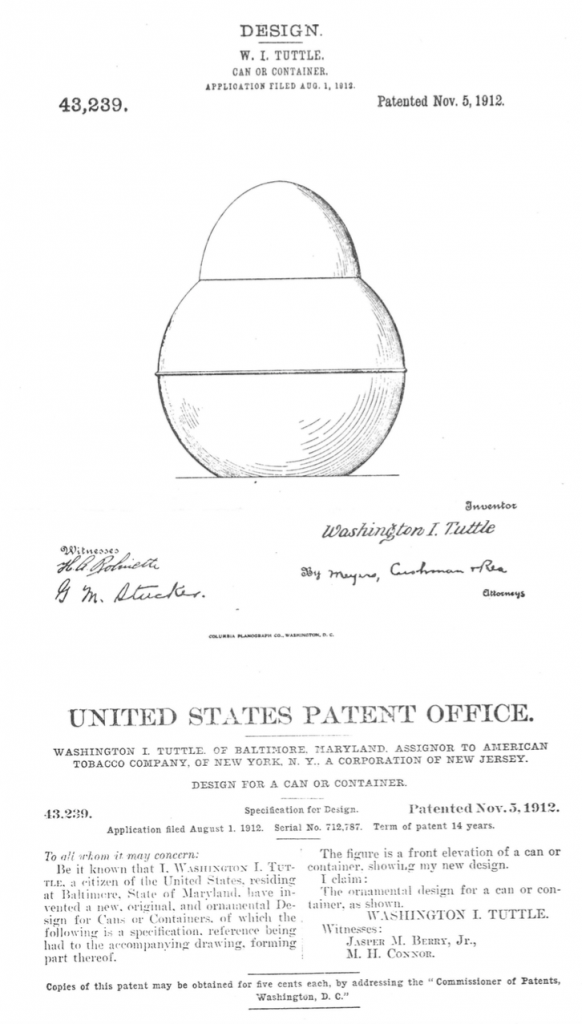 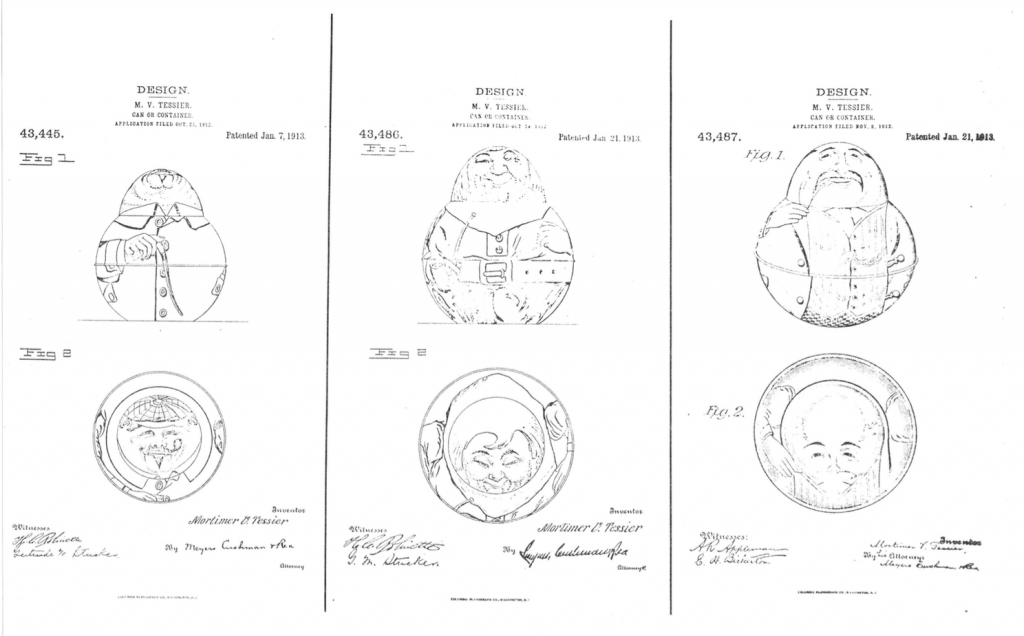 -The Storekeeper in the Red Indian brand has a pouch of Red Indian tobacco in his breast pocket, but the other three storekeepers each carry four cigars in that pocket

-The heads of the Mammy Roly Polys were variously made from two distinctly different lithographic stones. Some of the heads plainly show a reflection from the lady’s lips and cheeks while others have no such reflection. In addition, some Mammy heads have a far more intense blue hue.

-Similarly, the storekeeper Roly Polys were made from at least 2 different stones. The folds and blues in his clothing are markedly different in some models

-The Roly Poly tins were decorated with durable inks which are quite impervious to outside influences. Roly Polys can usually be easily cleaned and brightened with careful use of a combination of 0000-grade steel wool saturated with Sani-Wax, without much threat to the hard-baked surfaces. Few tobacco tins can be found with a surface as tough as on the Roly Polys.

-In Order of difficulty to obtain, the Mammy is the easiest, followed by Singing Waiter, Storekeeper, Dutchman, Satisfied Customer and finally the Man from Scotland Yard