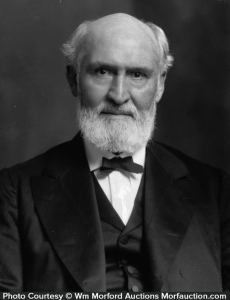 Although many others existed, there were four major tobacco companies active in Canada during the period most collectable tobacco tins were made. These tins are an integral part of the hobby and tins manufactured by the Canadian major tobacco companies: Imperial, Rock City, Tucketts, and MacDonald tobacco are featured in countless tin collections.
The W.C. Macdonald Tobacco Company was founded in 1858 in Montreal by Sir William Christopher Macdonald. Macdonald, who was born on Prince Edward Island in 1831 was known through out the region as a great educational philanthropist who grew interested in business and particularly the potential that lied in the tobacco industry. After founding the institution, it grew to be the largest individually owned industrial company in Canada and the largest independent tobacco manufacturer in the British Empire. Much of this success was due to the business savvy and quick market-based actions taken by Macdonald as the sole owner and decision maker for the company.
The company was best known for their chewing tobacco which was made with a combination of tobacco and molasses to give it a distinct sweet flavor. Once the product was in “plug” form it would be pressed into a heart shape and inserted into a tin leading to the company slogan “The Tobacco With A Heart”.
Interestingly, Macdonald showed public disdain toward tobacco use and the industry as a whole. He was known for finding smoking as insalubrious (although profitable) and many believed he was ashamed with the profits generated by the industry. This likely fostered his philanthropic nature which included numerous donations to educational endeavors including McGill University and the construction of schools in rural maritime areas. In 1904 Macdonald spent over a million dollars in Ste-Anne-de-Bellevue, which would become MacDonald College.
After Sir William’s death in 1917 at age 86, he left his entire fortune to charity and total control of the business was passed on to a manager’s son named Walter M. Stewart, who continued to run the business as a sole proprietor. Although he was a progressive and intelligent businessman, Stewart was very traditional in nature and was noted for refusing to keep a telephone in his office and refused to use typewriters due to their impersonal nature. While running a company of nearly 1,500 employees, he kept an office staff of only 6 people and many considered him heartless as many joked that the owner of Macdonald “The Tobacco With A Heart” had an owner without one. 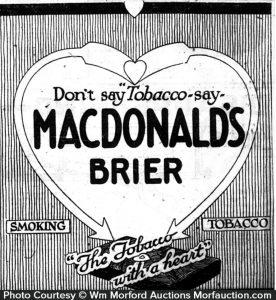 Under Stewart, the company expanded into the production of self-rolling cigarettes, cut pipe tobacco and eventually created “Macdonald’s Gold Standard” brand export cigarettes. During Stewarts tenure in the 1930’s Macdonald’s cigarettes began to feature their “Scottish Lassie” logo of a traditionally dressed Scottish woman based on the model Betty Annan Grant.

Macdonald’s was eventually bought out in 1974 by the R.J. Reynolds Tobacco Company in which took control of the company’s brand and manufacturing. Macdonald’s had surprisingly few brands potentially due to the success and longevity of each. The company used brands such as British Consul Export, Brier, Prince of Wales and Honeysuckle although their Pilot brand is widely considered to be the most interesting. The Pilot packaging featured a colorful picture of Napoleon gazing at a plug of chewing tobacco surrounded by cannons and cannonballs. Finally, the foreign rights of R.J. Reynolds were purchased by Japan Tobacco International which went on to rename the Canadian division J.T.I. Macdonald.

*Check Back for Part 4 shortly

Facebook Twitter Pinterest linkedin Telegram
Canadian Tobacco Tins Part 1: Imperial Tobacco Co. Although many others existed, there were four major tobacco companies active in Canada during the period most collectable tobacco tins were made. These tins are an integral part of the hobby and tins manufactured by the Canadian major tobacco companies: Imperial, Rock City, Tucketts, and Macdonald are featured in countless tin collections. Imperial Tobacco Company, which was to become the giant of the Canadian tobacco industry began humbly as t...